While HUYA (HUYA) languishes below $20, the company’s fundamentals continue improving. Despite facing competition from Kuaishou in the domestic market, downloads are remaining resilient and the company is expanding into the ACG market with its new streaming platform. The company is also killing it in international markets, with its NIMO TV service quickly becoming the 2nd largest streaming service in the world. We believe the company trades at an incredibly low valuation for the massive potential it entails.

Huya’s international app, NIMO TV, is also doing very well despite being launched recently. Downloads have increased to around 2mil per month, higher than Twitch’s 1mil monthly downloads, and the company has managed to claim 17.3% share of the total hours watched, which makes it the second largest gaming platform by hours watched. We believe the fast download growth and the substantial amount of share that NIMO TV has garnered shows that NIMO TV may have a superior business model compared to other competitors. 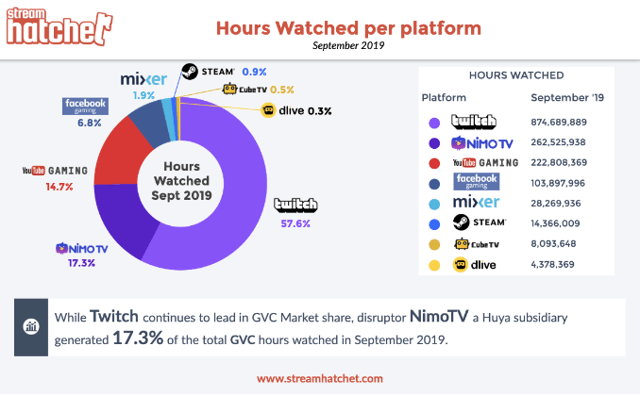 In the future, NIMO TV plans to expand into the US, where Twitch and YouTube Gaming are more popular. We believe its unique business model, which relies on donations instead of advertising or subscriptions, should help it garner a decent share of the US market. It helps that there has been a lot of controversy surrounding Twitch’s moderation policies, which may lead to some users switching to competitors.

Domestic market continues to be a major opportunity

Just a few years ago, famous celebrity Jimmy Kimmel had said that he “just doesn’t get” people watching gaming live-streams. Like Jimmy, many older adults were ignorant or dismissive of the practice of watching others game. Today, though, the scales have turned, with millions around the world tuned in to watch gaming. Top streamers can become celebrities themselves, earning millions while just playing a game. 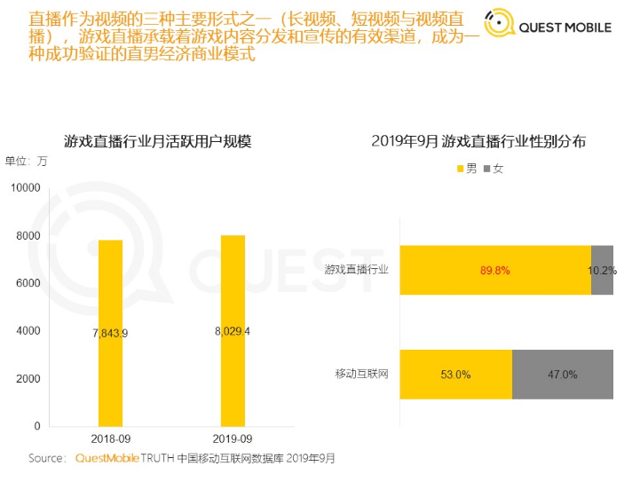 It is estimated to generate $19.2bil RMB($2.74bil) in 2019, with nearly 30% YOY growth expected into 2020. Monetization mainly comes from taking a cut of the gifts viewers gift to streamers, but the platforms also make money from advertising, betting (on events), subscriptions, e-commerce, and more. 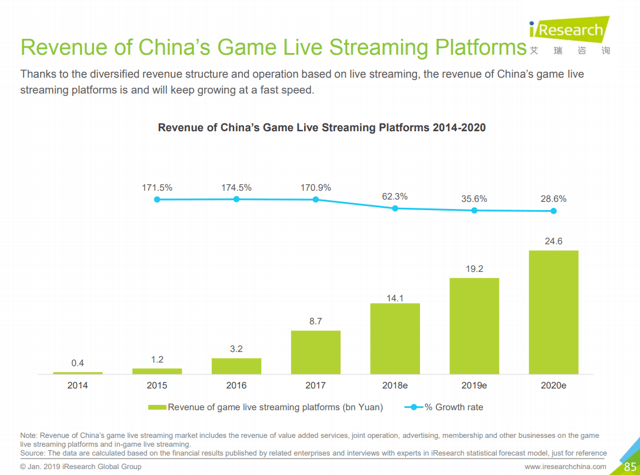 Since the proportion of paying users over total users is still quite low, there is likely substantial room for future growth in the market. For example, HUYA and Douyu have a combined 300mil MAUs but only have slightly more than 10mil paying users. Monetization of existing users should provide most of the growth in future years, and with YY’s monetization experience behind it, we believe HUYA should be able to take advantage of this opportunity. Recently, HUYA introduced games that users could influence by gifting, which we believe is a revolutionary way to get viewers to spend and interact with the broadcaster more.

For example, we now have some mini programs of interactive games in the open platform that allow viewers to influence game results through virtual gifting while broadcasters are playing the game. We estimate to invest approximately RMB1 billion worth of resources and capital in supporting our open platform strategy within the next three years.

While we are very hopeful regarding HUYA’s international efforts, in the case that international somehow doesn’t work out, domestic should help the company realize a few more years of double-digit growth.

In addition to growing by leveraging the game live-streaming market, HUYA is also entering the non-game live-streaming market by creating a new streaming platform that targets female Gen Z users. This would allow it to expand into the ACG category, which has a user base of over 370mil, and would also be very accretive to HUYA’s current userbase, which is 90% male-dominated, as shown in the chart above.

Of course, there would also be fierce competition along the way. Expanding into the ACG category would put HUYA in direct competition with Bilibili, which already has a close-knit community, as we mentioned in this article. HUYA would need to release a unique product and execute well in order to gain any substantial share.

HUYA’s valuation remains incredibly low for the potential it entails. It has $1.4bil in cash, which would mean EV would be around $2.6bil. We believe NIMO TV could be worth between $400-$600mil due to its large market share and incredible growth, but even if NIMO TV is included, HUYA only trades at an EV/FWD earnings of around 26x, a really low valuation for such a fast-growing company.

As you can see below, both Douyu and HUYA downloads have slowed due to the competition from Kuaishou, which recently reported that its service has reached 35mil DAUs and that live-streaming now makes up the majority of its revenue. Kuaishou’s huge short video userbase, along with its backing from Tencent (OTCPK:TCEHY), makes it a strong threat to HUYA. 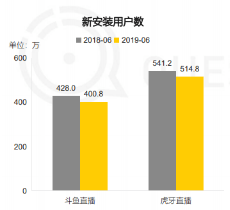 HUYA management has mentioned that while Kuaishou has executed well and obtained some streaming rights for major tournaments, they do not have as much coverage as HUYA and do not have the same advantages in professionally generated content as HUYA has signed the top broadcasters. While it is hard to say what would happen at this early stage, we do believe HUYA’s competitive advantages should hold up and allow it to continue leading the game live-streaming space.

Overall, HUYA is firing on all cylinders, growing quickly in both domestic and international markets, with more growth to come from its new streaming service. Despite this, its valuation remains incredibly low, with an EV around $2.6bil, or less than 26x EV/Earnings.

Disclosure: I/we have no positions in any stocks mentioned, and no plans to initiate any positions within the next 72 hours. I wrote this article myself, and it expresses my own opinions. I am not receiving compensation for it (other than from Seeking Alpha). I have no business relationship with any company whose stock is mentioned in this article.

Additional disclosure: I’m long HUYA through my ownership of YY

Who will be the new Legend for Apex Legends Season 4?

The Last Of Us Part 2 Review – Spoiler-Free Version

Google Stadia will add a free tier ‘over the next few...

Call of Duty Mobile – How to Change Profile Picture

Desperados 3 – The Quick-load And The Dead

Esports Evangelist Imari Oliver On Why Gaming Needs To Be More...

The US Army Is Banning Twitch Users For Mentioning War Crimes...