Full disclosure: I love video games, but I have all the digital skills of a wet bag of ramen noodles, so when I was asked to review Attack on Titan TACTICS, I panicked a little. My experience with real-time strategy games consists of activating “God Mode” in Blizzard’s Starcraft and Warcraft series and stomping the enemies’ bases with a single invulnerable peon. My mastery of tower defense consists of playing 15 minutes of Plants vs. Zombies and installing a Steam copy of Dungeon Defenders that crashes every time I try to boot the darn thing up.

My experience with social games with a gacha component is non-existent. What if my staggering ineptitude resulted in the entire Scout Regiment being devoured? How would I live with the guilt of sending poor Marlo Freudenberg and a bevy of other fresh-faced recruits off to die in the gullets of a horde of terrifying, naked, sexless, cannibal giants? I can’t handle this sort of pressure! 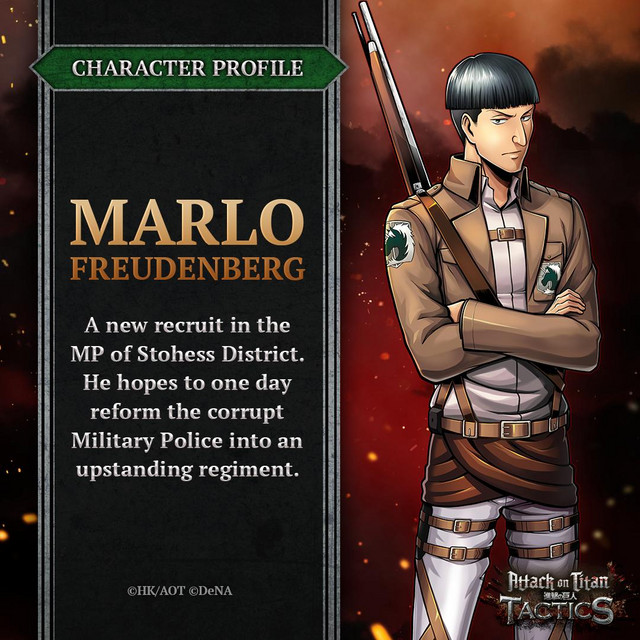 Lucky for me, Attack on Titan TACTICS is designed for both the hardcore (not me) and the casual gamer (definitely me) alike. After a bewildering intro mission that tossed me into the shoes of Eren Jaeger going toe-to-toe with the Female Titan in the Stohess District, I was soon plowing through the tutorials, learning the basics of how to train and deploy Scouts, and—like Captain Ahab—having a whale of a time. Attack on Titan TACTICS is an exquisitely crafted game with many simple systems that are easy to learn but difficult to master, and it provides just the sort of card collecting elements and RPG level up mechanics that fans can sink their teeth into. 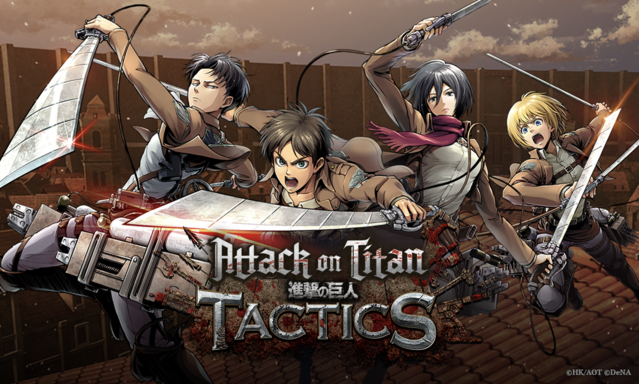 At its core, Attack on Titan TACTICS is akin to a collectible card game in which players use gacha mechanics to unlock and craft characters from the Attack on Titan manga and TV anime, each of whom has a distinct set of skills and combat applications. In the preview build that I played, I was allowed unlimited gacha rolls in order to add a single character to my roster. My first roll netted the indomitable…Marlo Freudenberg? Who the heck is Marlo Freudenberg? Sorry, Marlo, but your 4-Star ass isn’t cutting it when the fate of humanity is as stake.

I re-rolled twice (three rolls, total) and netted Annie Leonhart, a 5-Star Scout and also my favorite character from Season One of Attack on Titan. Feeling serendipitous and aglow with the irony of putting Annie in charge of my squad, I dove into the game and was instantly neck-deep in Titans. 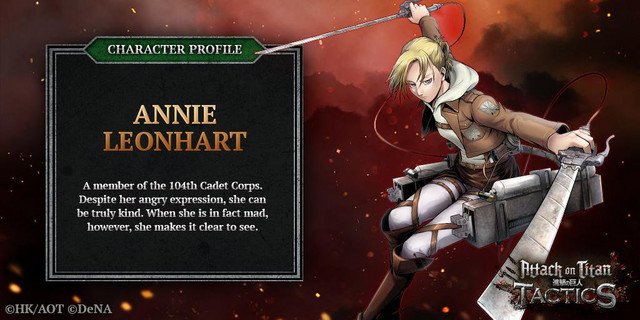 The Story Mode campaign in Attack on Titan TACTICS consists of five Chapters, with each Chapter further divided into individual stages, in which the goal is to fend off a relentless Titan assault with squad of selected characters. Each character fills a particular role: Attack types, such as Eren Jaeger and Mikasa Ackermann, attempt to control the battlefield and deal direct damage to the Titans with their blades. Assault types, such as Armin Artlelt and Sasha Braus, are deployed for a single massive hit in order to incapacitate the enemy or to rescue comrades that are about to be eaten.

There are also siege weapons such as cannons that deal direct damage or create area-denial effects to slow the Titans’ endless march. Deploying a unit costs a fixed amount of AP (“action points”), which are represented by a meter that slowly recharges as the stage progresses. Each unit has a stamina bar which ticks down as they attack or take damage from foes, and units temporarily depart the battlefield when their stamina is depleted. Each stage is timed, and completing the objectives quickly yields better rewards.

Choosing a well-rounded squad and picking when and how to deploy your units becomes increasingly challenging as the game progresses. In my play-through, I breezed through most of the early Chapters, relying on a brute force technique that required an overpowered and over-leveled Annie Leonhart to do most of the heavy lifting. But this lazy approach caught up with me, and I received a grim reminder that there’s a reason the ‘S’ in ‘RTS’ stands for “strategy”.

Upon reaching the end of Chapter 3, I hit a gigantic roadblock in the form of the Large Abnormal Titan boss, and my sloppy deployment tactics resulted in my base getting knocked into next Tuesday, prompting me to abandon the mission and spend several days regrouping and testing new schemes. Attack on Titan TACTICS forced me to adapt and to change my play-style. It made me a better player through a school of hard knocks approach, and the victory was all the sweeter when my new strategies paid off. 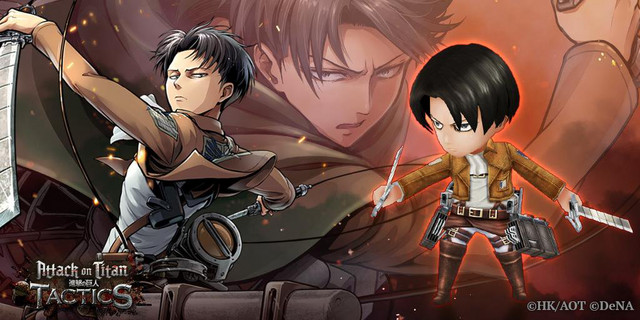 Outside of combat, there’s another layer of strategy via resource management. In order to level up your heroes and enhance their combat abilities, you must gather and allocate materials. Completing daily missions and scouting expeditions rewards you with different in-game currencies (deployment power, mercenary points, crystals, gold, etc.) which all have different functions: deployment power is used to field teams of Scouts to fight off Titans in order to progress the story or collect resources; mercenary points and crystals are used for gacha rolls to acquire new units; gold is used alongside other materials to make your Scouts more powerful, unlocking new abilities and passive bonuses as they level up.

It’s a very crunchy system, and nothing goes to waste. You can always exchange unwanted doodads for gold, and if you pull duplicate characters from gacha rolls (I’m looking at you, Hans), the duplicates are automatically converted into “souls” that can be used to make your existing characters stronger, bumping up their Star ratings and level caps through a process called “limit breaking”. 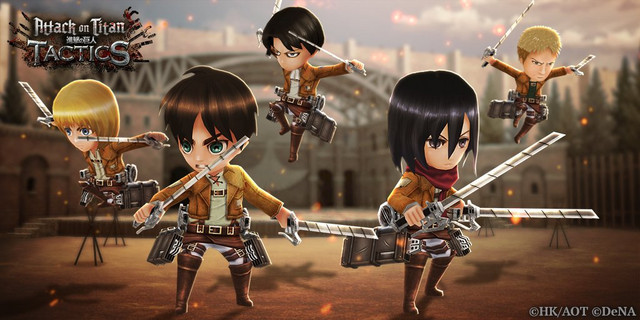 If real-time strategy and RPG elements aren’t your cup of tea, there are other aspects to enjoy in Attack on Titan TACTICS. Using a visual novel-style format with pictures, text, and voice acting, the Story mode currently recaps the events of the first season of the Attack on Titan TV anime (Episode 1 – 25), and there are future plans to encompass later plot developments in-game. Additionally, unlocking key characters also unlocks game-original Episodes (essentially cut scenes) that explore character’s backgrounds, elaborate on their motivations, or simply introduce a humorous twist. The scene with Conny and Sasha plotting to rob the officers’ meat rations made me legit laugh out loud. 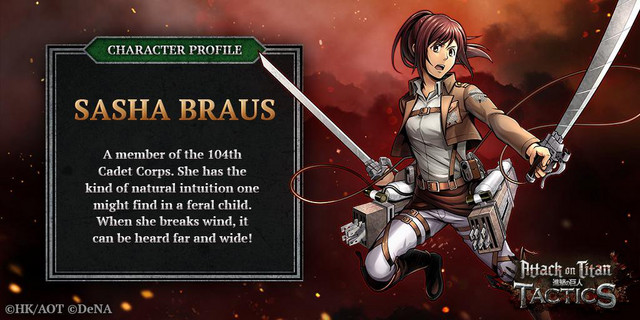 I’d never played a smart phone game before, let alone a gacha-style one, but Attack on Titan TACTICS made me a believer. The game features a basic free-to-play (with in app purchases) model, so it’s perfectly suited for casual players or hardcore fans alike. I spent more than an hour each day over a period of two weeks playing with the provided preview build—training up my heroes, unlocking new characters, progressing the story, managing resources, and sending my troops on timed scouting missions so that I could make progress in-game even while I was doing other things in real life.

I didn’t expect to be bowled over, but Attack on Titan TACTICS knocked my socks off, and I heartily recommend it to anyone who loves the Attack on Titan franchise and longs to experience a well-designed social game full of thrilling action, intriguing characters, challenging scenarios, and advancing giants that still manage to be completely horrifying even when sporting chibi-style character designs. 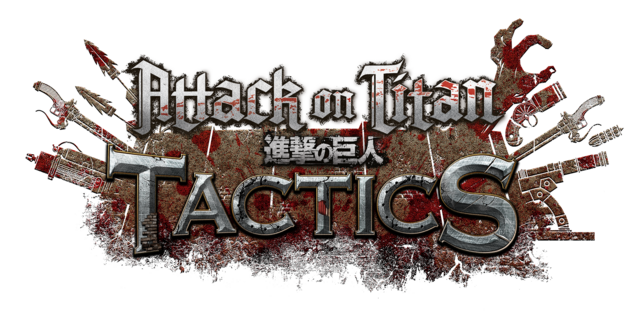 Want to save humanity from the greatest threat it has ever faced? Check out Attack on Titan TACTICS via the App Store and Google PlayTM today, or register at the official home page at aot-tactics.com.

+ Fun, fast-paced gameplay that is easy to learn but difficult to master.

+ Dozens of characters to collect with extensive RPG-style systems to build up your ideal team into a powerhouse force.

– Low drop rate on some of the coolest heroes. Advancing your Squad becomes more difficult post-level 20.

Are you ready to build a Squad and take the fight to the Titans in an effort to turn the tide for humanity? Who’s in your ideal group load-out? How many potatoes can Sasha fit in her mouth at one time? Let us know what you think of the game in the comments!

Paul Chapman is the host of The Greatest Movie EVER! Podcast and GME! Anime Fun Time.

Do you love writing? Do you love anime? If you have an idea for a features story, pitch it to Crunchyroll Features!

Will Legends of Runeterra come to Mac?

The best camera for streaming on Twitch, Mixer and Facebook Live

Five Below’s Esports Ambitions Could Mean the End of GameStop

Top Esports Players Have Made Over $50 Million In Total Earnings...

EVO 2020 to be held at Mandalay Bay – Esportz Network

Riot Sums Up: Heroes Released and Redesigned This Year and the...

how the new Teamfight Tactics items will shift the meta