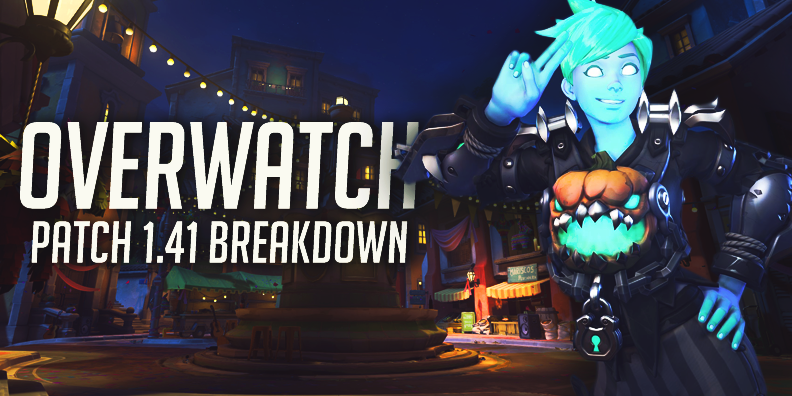 Another month has passed, which means we have yet another set of changes to go over — this time we’re taking a look at the Overwatch patch notes 1.41! As far as Overwatch patches go, this is a rather huge one. It doesn’t bring anything new per se, but it affects a large number of heroes and their viability. Fifteen heroes, in fact, are getting buffed, nerfed, or slightly adjusted, so make sure to read carefully as the meta could seriously change next time you queue up!

With the variety and sheer number of game modes increasing on a fairly frequent basis, Blizzard increased the number of cards Arcade shows to seven.

The second season of Competitive 3 vs. 3 Lockout Elimination has officially begun!

Blizzard is celebrating 25 years of Azeroth’s past at this year’s BlizzCon, so if you’re attending (or have a BlizzCon Virtual Ticket) make sure to get both skins created specifically to mark the special occasion: Illidan Genji and Tyrande Symmetra!

This is where the fun starts. The changes listed below are bound to heavily affect the current meta.

D.Va — D.Va’s Defense Matrix’s regeneration rate is going up from 12.5% to 16% per second. Also, the delay before regeneration kicks in has been lowered from one second to 0.75 seconds.

Orisa — Orisa’s barrier is a bit too hard to deal with at this point in time. To counteract this, Blizzard is increasing the cooldown of her Protective Barrier from 9 seconds to 10 seconds.

Roadhog — Historically speaking, Roadhog was always one of the better heroes when it came to destroying barriers. That said, the number of bullets he had at his disposal often felt too restrictive, meaning he couldn’t fully capitalize. Going forward, his Scrap Gun will have six bullets instead of five.

Sigma — Sigma is a bit too hard to deal with as he can quickly reposition his shield with relative ease and still use Kinetic Grasp to block incoming attacks from other directions. To bring him down to earth a bit, Blizzard is nerfing his abilities and thus giving his opponents a bigger window to capitalize on.

Going forward, Kinetic Grasp will no longer block Chain Hook or Whip Shot. Gravitic Flux’s high gravity effect will now last for 0.9 seconds instead of 1.2 seconds. Finally, Experimental Barrier’s regeneration rate is going down from 175 to 150 per second, and it’ll now have a one-second cooldown after recalling the barrier with its 0.2 second cast time being removed entirely.

These nerfs should make Sigma’s weaknesses a bit more prominent and allow for more counterplay.

Winston — Winston’s Barrier Projector is getting two noticeable buffs. Its duration is going up from 6 seconds to 9 seconds along with its health pool (up from 600 to 700). These changes should make the shield a bit more reliable of a tool which, in turn, should allow

Baptiste — The health of Baptiste’s Immortality Field is going down from 250 to 200. The only negative aspect of the whole ability is the fact that it’s destructible. By lowering its health pool, players will have an easier time countering one of Baptiste more potent abilities.

Lucio — Blizzard is shipping two noticeable buffs to Lucio, along with a simple nerf. Going forward, Crossfade will provide a 25% speed boost (instead of 20%), Amp It Up will amplify his speed boost by 60% (instead of 50%), whereas Wall Ride will no longer provide a 40% speed buff but instead just 30%.

Moira — The self-healing on Moira’s Biotic Grasp is going down from 30 to 20 health per second. Blizzard wants to tone down Moira’s dueling capabilities and this is definitely a good way to do it.

Doomfist — Doomfist’s Rocket Punch will now need 1.4 seconds to reach its maximum charge (instead of a one-second duration), and the shield health gained per hit on his The Best Defense is getting reduced from 35 to 30.

These changes will make Doomfist’s attack slightly more telegraphed, and they’ll also reduce his ability to soak in tons of damage.

Sombra — Sombra’s Translocator will now have a longer cooldown (up from 4 seconds to 6 seconds) but its cooldown will begin immediately upon deploying the beacon. This will give Sombra a lot more flexibility when it comes to how she wants to activate her Translocator and when.

Symmetra — Photon Barrier’s duration has been reduced from 15 seconds to 12 seconds, and its health is also going down from 5000 to 4000. Her Sentry Turret will now deal 40 damage per second instead of 50 and the players who get impacted by Photon Projector’s primary fire beam will now hear a loud sound indicating that they’re being damaged.

Tracer — Tracer’s Pulse Pistols will now have a longer damage falloff (up from 10 meters to 13 meters). This will allow Tracer players to deal more damage from a distance which should, in turn, keep them a bit safer in the heat of battle.

As always, here’s a list of bugs that have been ironed out.

That’s it for our Overwatch patch notes 1.41 breakdown! If you want to go over the patch in a more official manner, you can click here to go to Blizzard’s official website.

Who won the weekend — VALORANT, NBA 2K shine through

Get a sneak peek at the platform you’ll be using to...

Jargon: Battling Through the Boss Levels of eSports Jargon

World of Warcraft’s Corruption system will be removed in a Shadowlands...